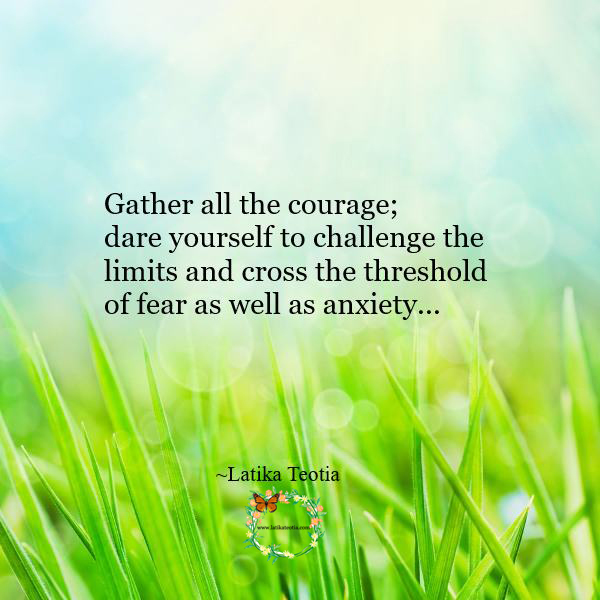 Unless you risk and break free of the bars that hold you caged you won’t gain something which can take you to even greater heights. Gather all the courage; dare yourself to challenge the limits and cross the threshold of fear as well as anxiety- something better awaits you at the other end. Those who wait for fruits to fall wait longer than those who pluck it off the tree. ~Latika Teotia 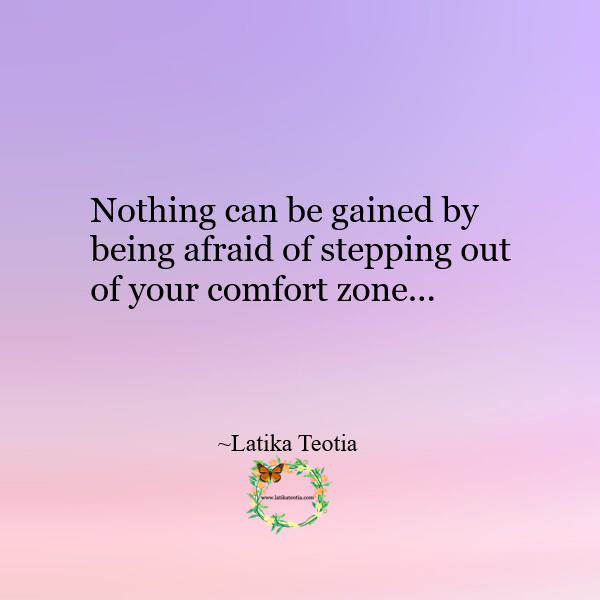 Taking risk is a part of the lives of successful people. Nothing can be gained by being afraid of stepping out of your comfort zone. You can work to your fullest under pressure with adrenaline pumping in your veins. Even animals perform better under stress; the tiger chases the deer because it knows it’ll have to go hungry otherwise and the deer flees for its life.

It is out of fear of the unknown or underestimating your inner strength that you are not able to realize your true worth. Be bold, take a step forward. Go about your fears logically, make a list of what you are afraid of, think of what is the worst that can happen, what are the options available, what are the risks involved, what can possibly go wrong and then you’ll have a clear picture. Thereafter, chalk a path and stick to it. Adopt a positive attitude towards your goal or objective or job or relationship or whatever you are pursuing and you’ll find that the positive vibes enrich the environment. Once you’ve come out of such a situation you’ll have the confidence to face anything. Taking risks will become a second nature. ~Latika Teotia 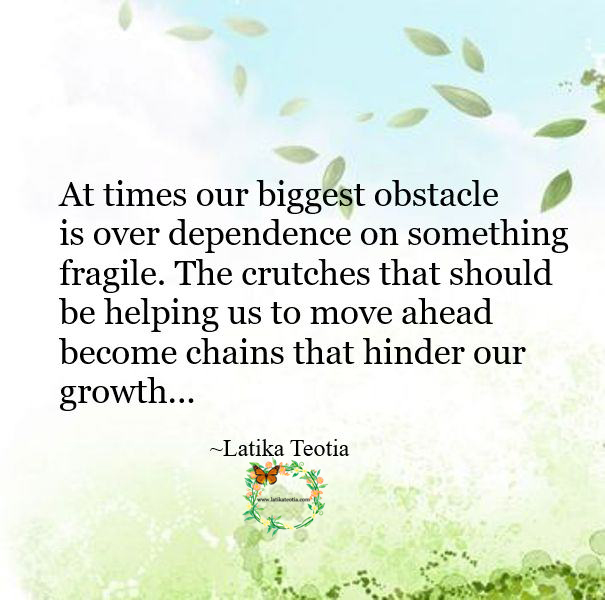 The wise man thanked them for their hospitality and left. When he reached the first bend in the road, he said to his disciple, “Go back, get the cow, take her to that cliff in front of us, and push her off it.”
The disciple could not believe his ears. “I cannot do that, master! How can we be so ungrateful, cruel and heartless? The cow is all they have. If I throw it off the cliff, they won’t be able to survive. Without the cow, they’ll all die!”
The wise man took a deep breath and repeated the order- a little firmly this time. Though outraged, the student obeyed his teacher. He returned to the hut, untied the cow and quietly led it to the edge of the cliff from where he pushed it. The animal fell down and died.
As the years passed by, remorse for what he had done never left the disciple. One day, the guilt became too much to bear so he left the wise man to see the family of that little hut. He wanted to find out what had happened to them; to help them out, apologize or somehow make amends. Upon rounding a turn in the road, he saw that in place of the poor miserable hut stood a beautiful house with trees all around, a well manicured lawn, a swimming pool and several cars in the garage- in short a prosperous looking place. The family was celebrating their first million dollars.
The heart of the disciple froze and wondered what could have happened to that poor family. Without a doubt, they must have been forced to sell their land and leave. Perhaps at this very moment they must all be begging on the streets of some city. He approached the house and asked them the whereabouts of the family that had lived in poverty there several years ago.

“You’re looking at that family,” said the man. At that instant the disciple recognized the owner of the poor hut, only now he was much healthier, happier and confident. The woman too looked happy and the children were now healthy good looking teenagers.
He was dumbfounded, and asked, “What happened? I was here with my teacher a few years ago and this was a miserable place. There was nothing. What did you do to improve your lives in such a short period?”
The man looked at the disciple and replied with a smile, “Yes I remember you and the wise man. After you left, our cow strayed and fell off the cliff. When I went down, I found it dead. Initially I cursed my bad luck. But we had no time to cry. In order to survive, we had to start doing other things. We discovered skills we didn’t even know we possessed. Because we were forced to come up with new ideas, new ways of doing things, we prospered and are now much better off than before.”
At times our biggest obstacle is over dependence on something fragile. The crutches that should be helping us to move ahead become chains that hinder our growth. So, perhaps, God wants to “push your cow off the cliff” and make you aware of your strengths. Trust Him and turn to Him for guidance.
~Latika Teotia 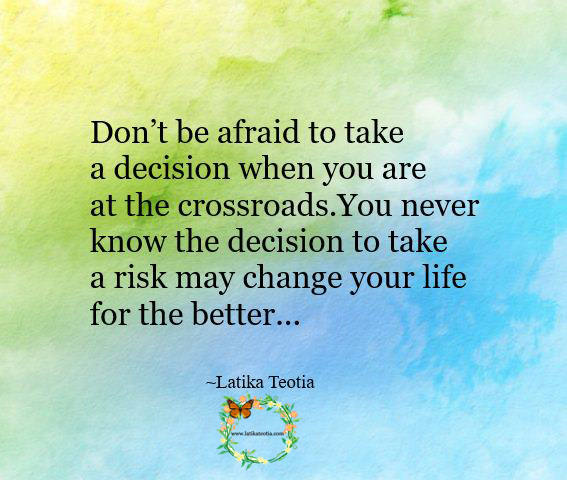 There comes a defining moment in our lives when we have to decide whether to stay the course and play safe or take a plunge. Don’t be afraid to take a decision when you are at the . You never know the decision to take a risk may change your life for the better. Be bold. ~Latika Teotia