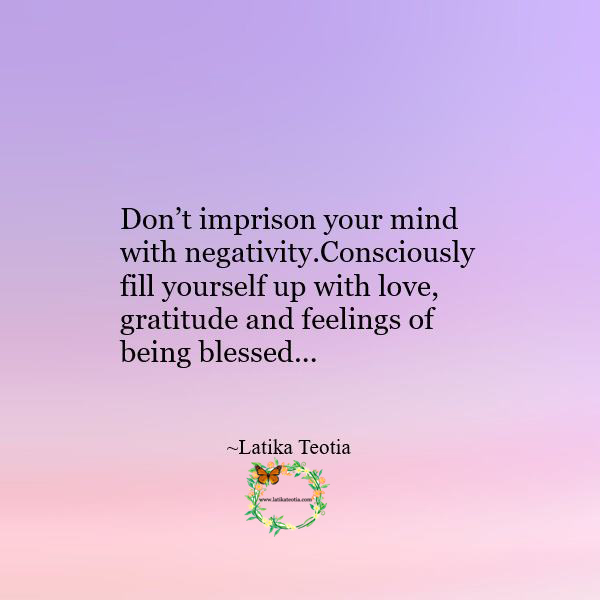 Anything held for a long time becomes heavy. Try holding a glass of water for a minute, ten minutes, half an hour and an hour. Though no water has been added or taken out, the weight increases progressively. Same goes with our negative thoughts. The longer you hold on to them, the heavier they’ll become till you reach a stage when negativity takes over your complete self and drives out even a small speck of positivity.

I’m reminded of the story of a small boy who always used to fight with his classmates. One day the teacher called him aside and asked why he was getting into fights with everyone. The boy told her that they started the fight not he. She asked him why he had kicked John for no apparent reason. He replied that John had kicked him before lunch time and run away; since he could get hold of him (John) in the class he took revenge. And the boy narrated several other instances of his class mates who initiated the quarrel and he had only retaliated. The wise teacher told the boy to hence forth carry a bag with a dozen potatoes in it. He was not supposed to take it off even after reaching home and could take it off only when he went off to sleep. The boy did as was asked. He didn’t find any difficulty the first day. The next day he was slightly uncomfortable but could manage it through the day. And so his discomfort increased with each passing day, later even the potatoes started rotting and left a stench. Finally when the boy couldn’t take it anymore he approached the teacher and requested her to allow him to take the bag off. When the teacher asked him the reason he told her that the bag had become very heavy and letting out a rotten smell. The teacher then drew a comparison between the bag of potatoes and his desire to take revenge. She told him that when he carried such negativity it made him turn negative and he wasn’t able to enjoy the good things because his mind, like the rotten potatoes, was always cluttered with negativity and rotten thoughts.

So, learn to let go and move on. Don’t imprison your mind with negativity. Life is meant to be lived positively full of  love  and cheer ~Latika Teotia

Remove all your nagging self doubts and let your spirit soar. Focusing only on the positive and feeling grateful for what’s going well in your life is a way to live a life of abundance as well as bliss. Repeat to yourself over and over again that you are going to lead a wonderful life. Open yourself and fill your spirit with love, positivity and light. ~Latika Teotia 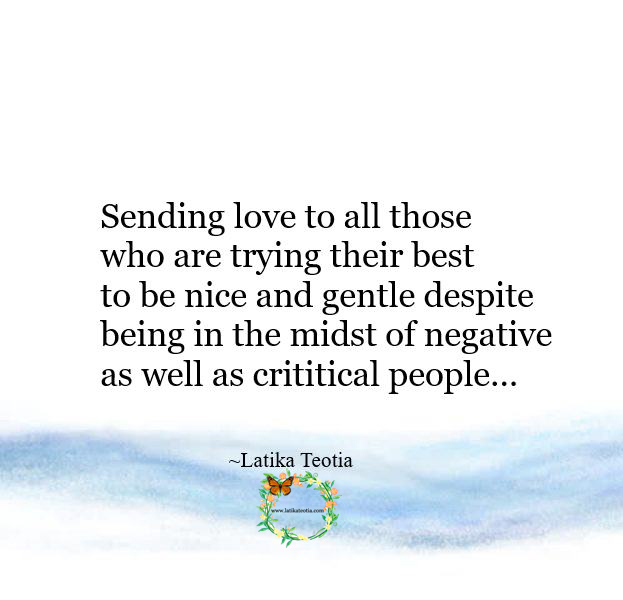 I appreciate all those who are fighting to stay positive, kind and gentle in the midst of negative people. A single lamp is enough to lighten a room full of darkness; so also one single kind hearted positive person is enough to ward off all the negative, critical and difficult people. ~Latika Teotia 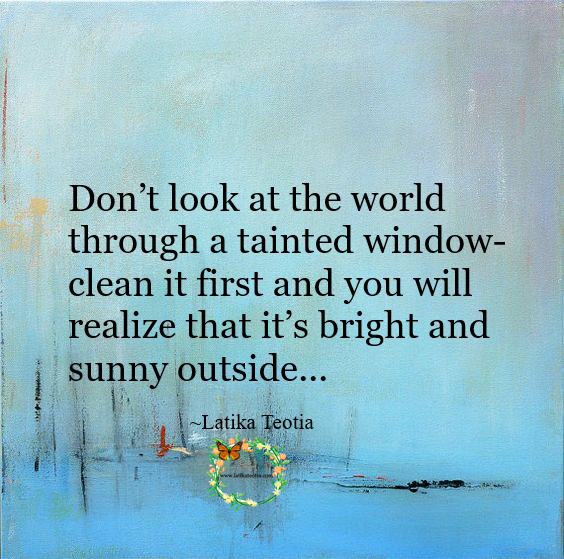 Be appreciative about others, don’t criticize or crib about them. Gossiping will only fill you with negativity. Speak well about others. Positivity begets positivity. Don’t be in a hurry to pass judgment or criticize, check yourself before you do. It’ll pass- once you make a deliberate effort to be positive. If you can’t speak well of others then you have no right to speak ill either. A critical attitude spoils everything. You aren’t happy; in turn you don’t give your best, resultantly you get ticked off. Because you get ticked off you crib and criticize little realizing that you started this vicious circle in the first place.

What, then, is the solution ??? It’s simple. Learn to see the good in everything and, more importantly, ignore the bad. Don’t go to the garden to see only those patches where there’s no grass, the beds where the flowers have not been able to bloom or the places where there are overgrown hedges. Instead go to relax, see the flowers in full bloom. Be thankful that you have sight to see things. Don’t criticize the elevator that broke down this morning- be thankful that you are strong enough to climb stairs. Don’t find fault with your boss and your job- be grateful that you have a job. Don’t look at the world through a tainted window- clean it first and you will realize that it’s bright and sunny outside. ~Latika Teotia