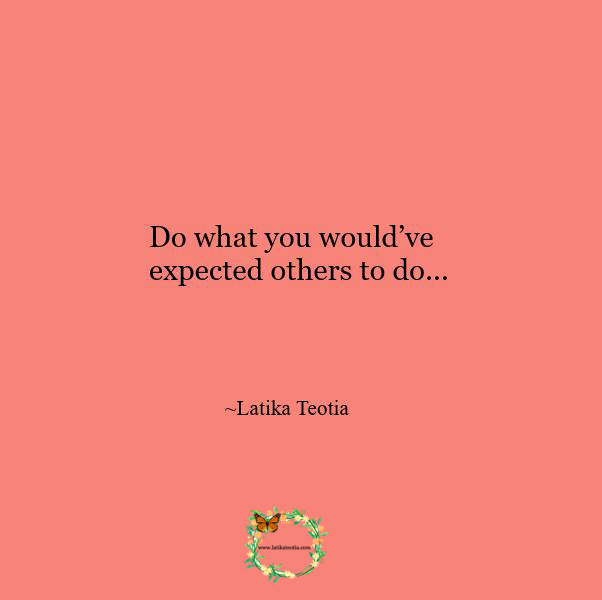 Quite often we feel neglected because we expect others to ask about us, worry about our problems and feel disappointed and upset if they don’t. We must realize that people are so caught up with their own lives and their own problems that they hardly have any time to look around. If someone doesn’t give a personal touch, it doesn’t mean that they are indifferent or uncaring; on the contrary, their busy life, their problems, struggles and so on have turned them into what they are. But, that doesn’t mean you become like them. Just do what you would’ve expected others to do. Be concerned about the problems of others; empathize with those who’re passing through a rough patch; offer to help those in distress- in short, show that you care. ~Latika Teotia 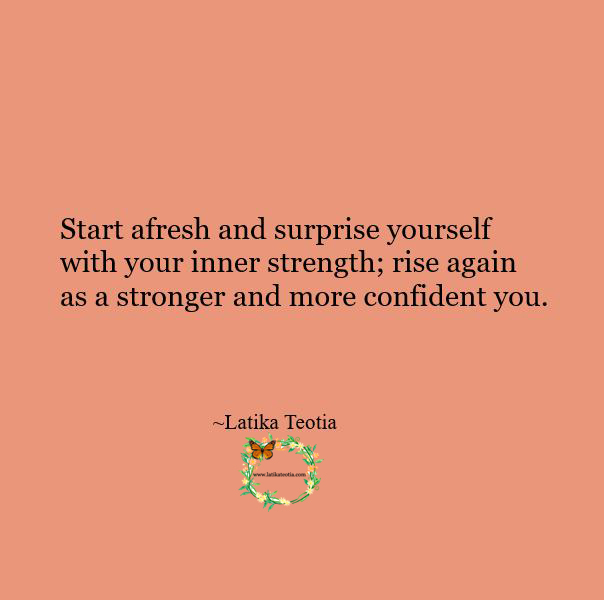 Don’t rewind and play that sob sob sad song of your uncomfortable past. Don’t waste time; just move on and write a fresh chapter of your life. Start writing in a new book with a new pen and paint a story so beautiful, so stunning and so full of life that people should be inspired by it.

Life is too short to be wasted on remembering or reliving the sad past. It’s human to get hurt or to commit mistakes but don’t be stuck with it and cry over what’s over. Start afresh and surprise yourself with your inner strength; rise again as a stronger and more confident you. ~Latika Teotia 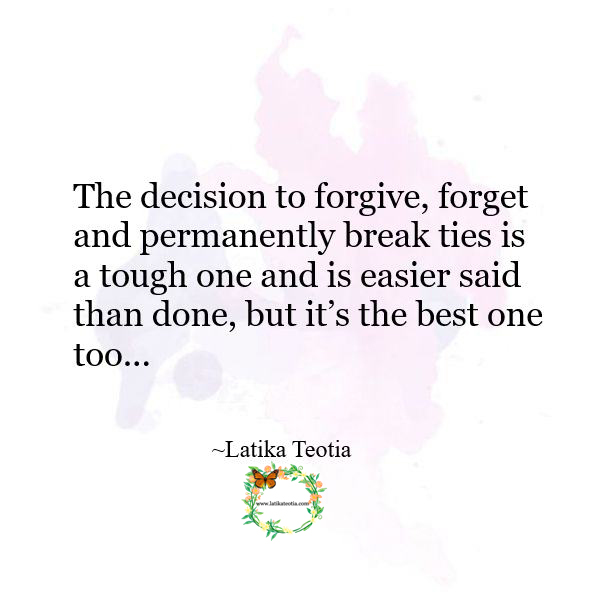 It is not a sign of weakness to forgive, forget and move on. On the contrary it shows our strength and our character. It is not worth the time, effort and energy to hold on when things go beyond a certain point, and it’s a waste of time to brood . I know ,the decision to forgive, forget and permanently break ties is a tough one and is easier said than done, but it’s the best one . Therefore, be brave and take the plunge- you have only your problems and tensions to lose. The future will be bright; at least it will be better, brighter and happier than the one you are presently in. ~Latika Teotia 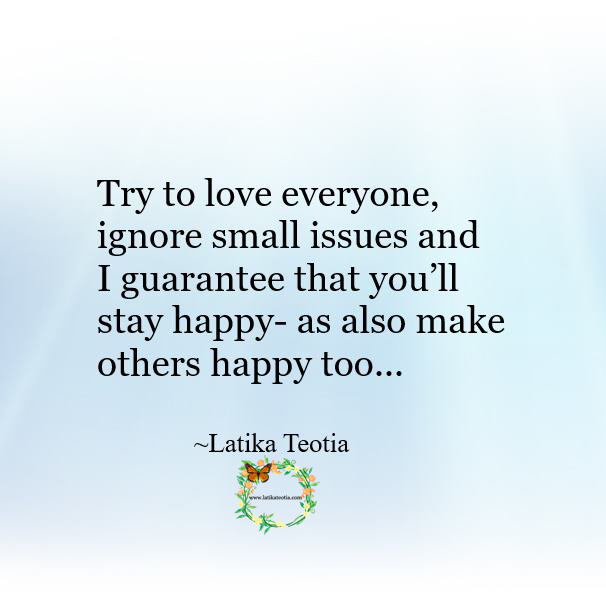 When we love someone, their biggest mistakes appear very small and we just ignore them. Treat everyone that way- especially your immediate family as well as your close circle.

Since you love them, put the petty things out of the way. Ignore smaller issues and don’t be ready to sermonize at the drop of a hat; no one likes to be ticked off. In your own house too, it’s better to ignore small irritants like someone leaving clothes crumpled in the cupboard or not putting the sofa cushions back in place or leaving used cups on the table or not cleaning the washroom properly after themselves or not leaving the remote control in the proper place and so on. It’s better to set it right yourself rather than spoil their mood or their day by pointing out or by making them set it right.

Remember, no one is deliberately triggering you; they just don’t realize their mistakes and with the passage of time they will surely come around to what you want- give them time. Even you may be having many faults which are so obvious to others but they are not pointing it out because they love you and would rather lose out on ego than on relationship.

Love people as they are , ignore small issues and I guarantee that you’ll stay happy- as also make others happy . ~Latika Teotia 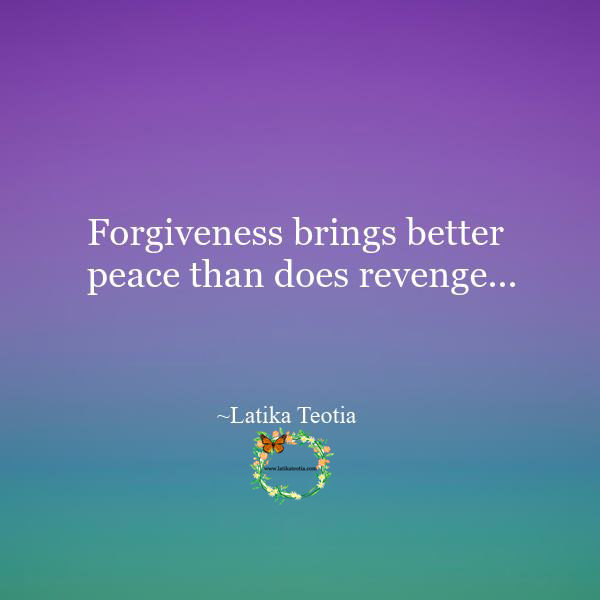 When we get hurt or jilted or have been the victim of something, the first reaction is to seek revenge. We get so blinded by our anger that we forget that the Lord had said that vengeance was His. We forget that forgiveness brings better peace than does revenge. Why poison someone when you can do the same thing with sweetness? I will narrate a small story to illustrate my point.

A farmer had a neighbour who was a hunter and who owned ferocious but poorly trained hunting dogs. They frequently jumped the fence and chased the farmer’s lambs. The farmer asked his neighbour to keep his dogs in check, but it fell on deaf ears.
One day the dogs jumped the fence and attacked the lambs severely injuring several of them in the process. The farmer had had enough, and went to the town to complain. The wise judge listened patiently to his woes and then said, “I can punish the hunter and instruct him to keep his dogs chained or lock them up. But you would lose a friend and gain an enemy. Which would you rather have, friend or foe for a neighbour?” The farmer replied that he preferred a friend.
“Alright, I will offer you a solution that will keep your lambs safe and will also help in keeping your neighbour a friend.” He heard the judge’s solution and agreed to give it a try.
Next day he took two of his best lambs and presented them to his neighbour’s two small sons. Naturally, they were thrilled with joy and began to play with them. To protect his sons’ newly acquired playthings, the hunter built a strong kennel for his dogs. Since then, the dogs never again bothered the farmer’s lambs. Out of gratitude for the farmer’s generosity toward his sons, the hunter often shared with the farmer the game he had hunted. The farmer too reciprocated by sending the hunter cheese whenever he used to make it. This way, within a short time, the neighbours became good friends.

It is said that you can catch more flies with honey than with vinegar. It pays to forgive, forget and move on. So keep your temper in control, overcome your desire for vengeance and free yourself from a self created prison.
~Latika Teotia 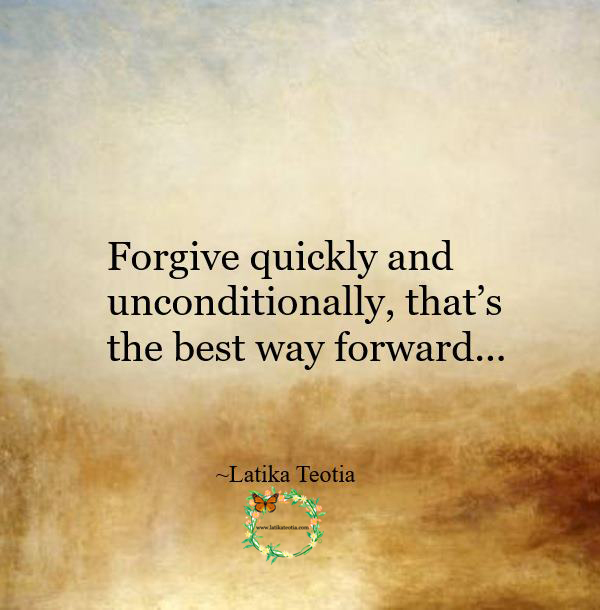 The choice to remain unhappy because of your hurts, pains and miseries by hanging on to them or live happily by forgiving and moving on is yours. There are lots of times that you may have felt that injustice had been done to you, that you were kind to someone who in return turned out to be ungrateful, that you loved with all your heart giving it all that you had but what you got in return was a broken heart and broken dreams, in short life has been very unfair to you. Right ??? So what do you want to do ? ??Hang on to those miserable thoughts and moments? Will it help in any way ??? Are you going to get justice, will your heart be the same once again???
Get real. Hanging on to bitter memories will only harm you because you will turn bitter and you will go crazy simply trying to deal with this accumulated mound of misery. Choose instead to forgive, ignore and move on. Get rid of that excess baggage that you have been carrying in your heart all this while and you will suddenly feel lighter as if a huge stone has been lifted from your chest. Forgive quickly and unconditionally, that’s the best way forward. Don’t be tied down by bitterness and let it not ruin your life. ~Latika Teotia 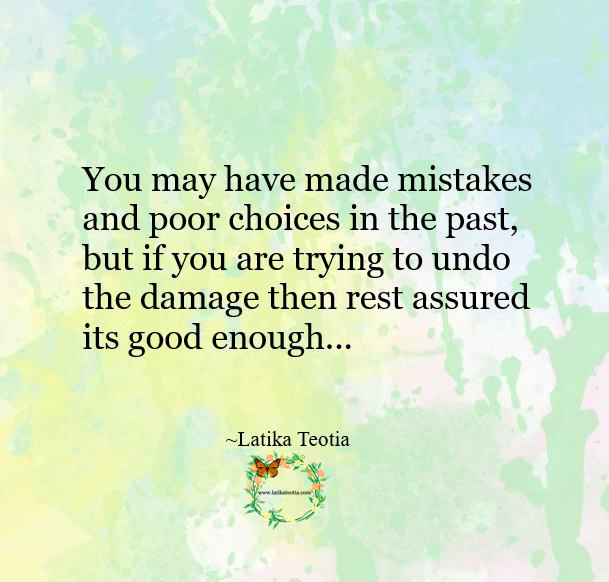 You may have made mistakes and poor choices in the past, but if you are trying to undo the damage then rest assured its good enough.~Latika Teotia 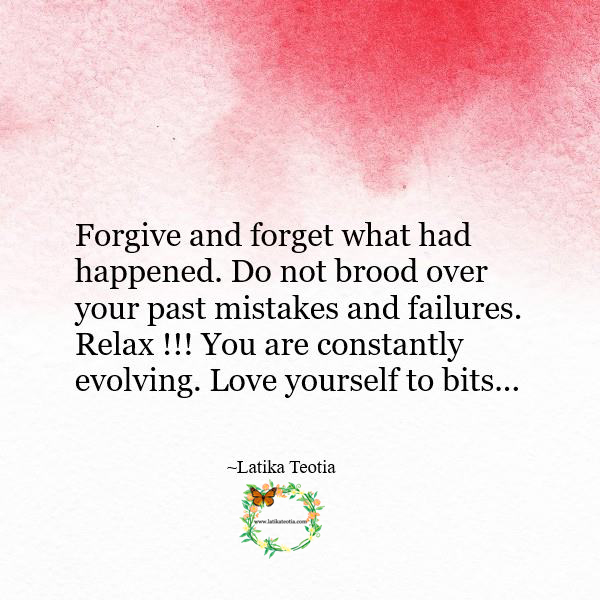 Forgive and forget what had happened. Do not brood over your past mistakes and failures. Relax !!! You are constantly evolving. Love yourself to bits.
Get up !!! Step out !!! and keep this in your heart “God  is good. He does good. He works all things together for good. ~Latika Teotia 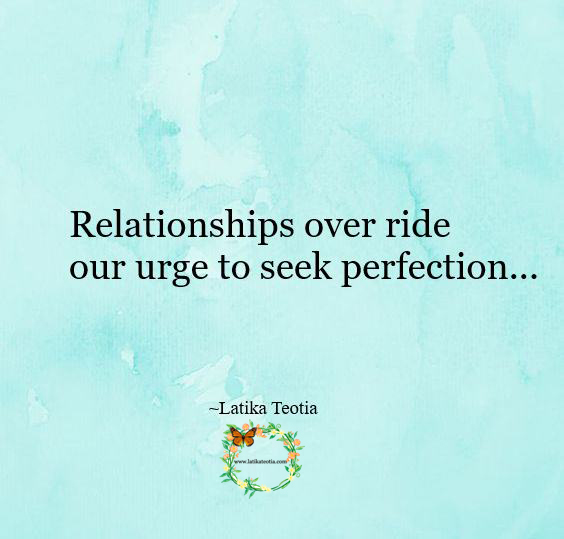 No one is perfect, even the people we love. We expect too much from others and feel sorely disappointed when they don’t measure up to our standards. We must stop expecting too much and start being real. Our parents, siblings, relatives, friends, neighbours, colleagues and all others too go wrong at times. Accept them as they are with their flaws, faults, warts and all. Forgive them. That’s maturity and that too is love. Relationships over ride our urge to seek perfection. ~Latika Teotia

Don’t be swayed by what others think or those who are judgmental about you. They have no idea what all you have been through to reach this place. Forgive them because only you and those true to you will be able to see the complete picture. ~Latika Teotia